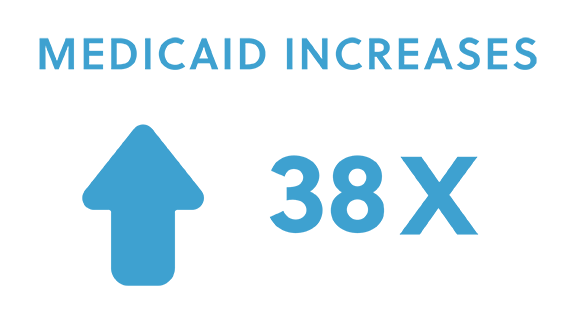 AcceliCLAIM brings transparency to Medicaid claiming program for large urban school district, resulting in a 3,650% increase in revenue with a near zero percent denial rate.

Our client school district had two key project goals when they partnered with Accelify—increase Medicaid compliance and maximize Medicaid revenue.

Having been penalized by negative audit findings, due to insufficient Medicaid compliance assurance from the prior vendor, the school district needed their new vendor to enhance the claim validation process, reduce denial rates, and protect the district from future audits.

In addition, with limited visibility into why services were (or were not) being claimed, the status of payments, and the reasons for claim denials, the school district was seeking a solution to that would allow them to identify and correct process deficiencies and identify new billing opportunities.

Accelify worked with our client to identify the data elements required to properly validate claims (i.e. eligibility, parental consent, etc.) and establish a process to securely transfer the validation data & service records. Using AcceliCLAIM, Accelify performs multiple validations on each service record prior to building it into a claim.

AcceliCLAIM has provided visibility into the claiming process, allowing our client to maximize revenue using:

Accelify also maximized reimbursements by advocating for policy changes on behalf of the client, such as the policy that resulted in denials of claims for students with private insurance (TPL). Accelify prepared a report detailing how other Medicaid agencies handled TPL, which ultimately led to the agency creating a clearer TPL policy that allowed for payment of these claims retroactively and on a go forward basis.

Accelify’s work has resulted in substantial gains in Medicaid revenue and compliance. In year one, Accelify increased Medicaid revenue tenfold and has continued to enhance the program, with year-over-year increases that have led to annual payments of over $15mm. In addition, denial rates have been reduced from 40% to less than 5% of claims—a clear indicator of more compliant claiming procedures.